The Most Inclusive European Countries for LGBT+ Professionals

June marks Pride Month, and whilst most businesses just alter their logos to reflect the iconic rainbow flag during Pride Month, Reboot Digital PR Agency wanted to take it one step further. We opted to apply its data-mining talents to discover which European countries provide the best career prospects for LGBT+ employees.

To find which European nations provide the best possibilities for LGBT+ professionals, we established our very own points-based ranking index. We started by analysing elements that contribute to workplace inclusiveness by using data from FRA and Eurostat to construct a points-based score that decides which nation comes out on top.

For this study, the following questions from the LGBTI Survey were considered:

◾ Openness about being LGBT+ at work

◾ Discrimination in the past 12 months when looking for work

◾ Discrimination in the past 12 months at work

This, combined with the difference in job opportunities between the LGBT+ community and the rest of the country, allowed us to attribute scores for the following:

The most LGBT+ inclusive European countries for professionals 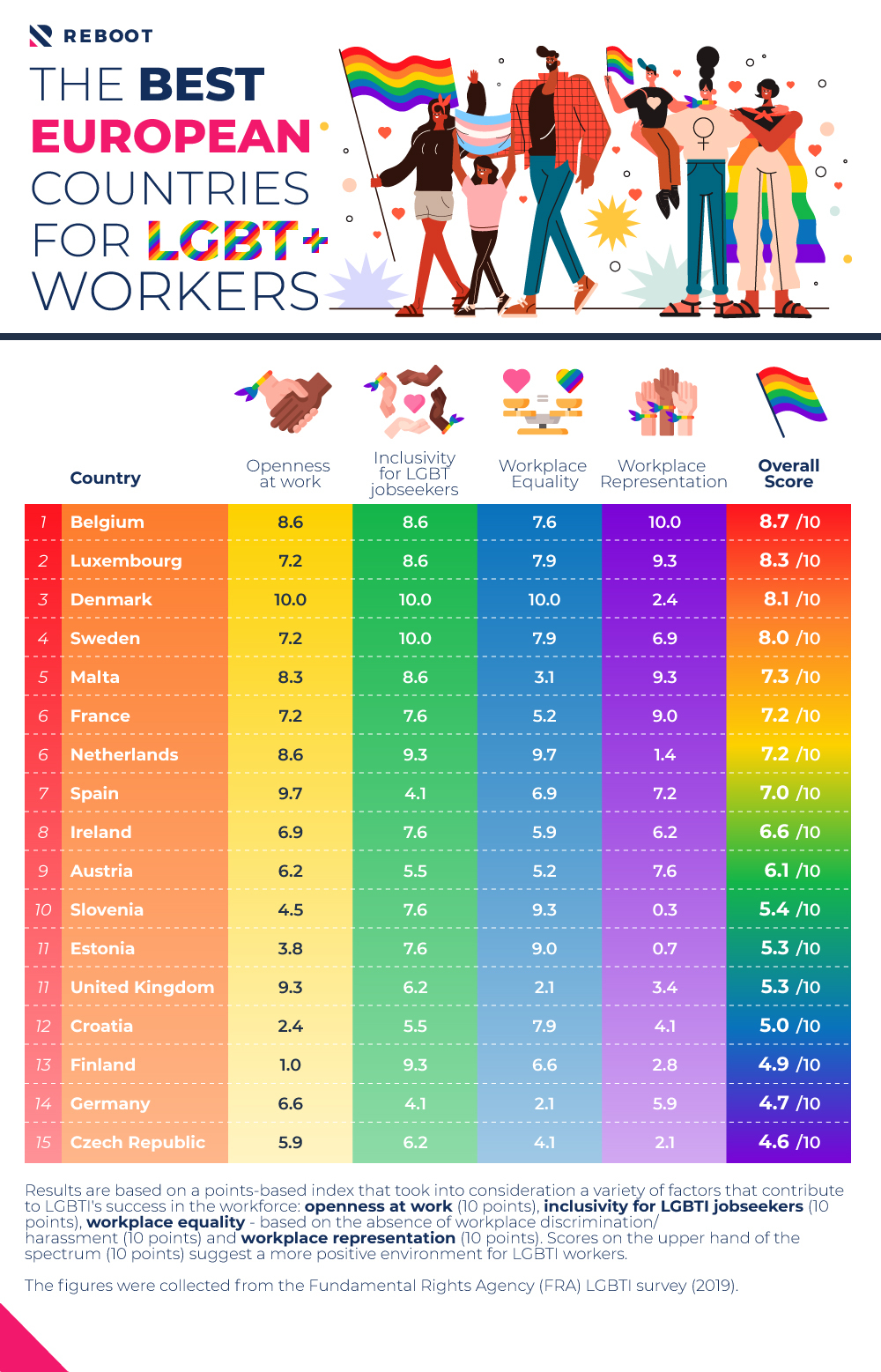 With 8.7 points out of a possible 10, Belgium has been named the greatest European country for LGBT+ employees. Despite having a lower employment rate (17% lower than non-LGBT+ Belgians), LGBT+ workers receive a perfect score of ten out of ten for workplace representation.

Luxemburg has a 19% disparity in employment rates between LGBT+ and non-LGBT+ employees, putting it below Belgium (8.3/10) regarding workplace representation. According to our research, almost seven in 10 LGBT+ nationals are either selectively open or hide their sexuality at work, resulting in a score of 7.2 out of 10 for openness at work.

Denmark is in third place with 8.1 points out of a possible 10. Despite having the best score for most of the variables studied, Danes appear to lack diversity in the workplace. LGBT+ employees had a 30% lower employment rate than other professionals (which is lower than nations like Hungary), which gives it a score of 2.4 in workplace representation.

Sweden received a perfect score for inclusivity for LGBT+ job seekers, but the 6.9 in workplace representation means the nation scores eight out of 10 overall.

It may be somewhat surprising that Sweden is not further up the list after a recent study shows that 98% of Swedish citizens believe homosexual and bisexual individuals should be afforded the same rights as heterosexual people, and 92% back same-sex marriage.

Even though Malta is recognised for providing the most progressive LGBT+ rights, including being the first European country to ban conversion therapy, the country received just 7.3 points out of 10 due to workplace discrimination experienced by 16% of LGBT+ employees.

11. Estonia and the United Kingdom

Estonia and the United Kingdom tied in eleventh place with an overall score of 5.3 out of 10. However, whilst Estonia only received a score of 0.7 for workplace representation, compared to the UK’s 3.4, they had a higher score for workplace equality.

There were similar results regarding workplace discrimination for both nations, with a fifth of Estonian and British respondents saying they had experienced it in their working lives.

Despite being the second-best European country for women to work, Croatia only managed to claim the twelfth spot regarding LGBT+ inclusivity in the workplace. With five out of 10 in terms of the overall score, the lowest mark comes from openness at work as just 9% of survey-takers felt they were very open about their sexuality whilst in the workplace.

Finland is thirteenth, with a score of 4.9 out of 10. Although they scored highly in inclusivity for LGBT+ job seekers, the nation falls short in openness at work. Only 8% of survey respondents said they were very open when it comes to their sexuality at work, with the remaining 92% feeling less confident to do so.

Germany comes in fourteenth due to an overall score of 4.7 out of 10. This time, workplace equality is where this country received the lowest score - a poor 2.1 out of 10 - which means that many LGBT+ professionals have experienced incidences of discrimination or harassment at work.

With 4.6 points out of 10, the Czech Republic is ranked fifteenth for Europe’s most inclusive countries for LGBT+ professionals. Despite receiving just 4.1 points for workplace equality and the fact that 13% of Czechs have experienced workplace discrimination, this country received a 6.2 out of 10 for LGBT+ job seekers' inclusion.

Just missing out on the top 15 is Poland, with a score of 4.5 out of 10. Although only 5% of survey respondents said they had experienced workplace harassment, a quarter (24%) had seen some form of discrimination due to their sexuality.

Cyprus and Lithuania score a pitiful 1.7 out of a possible 10 points in our study overall, putting them in last place. Even though Cyprus' human rights law has improved since entering the European Union, the zero points for workplace equality imply that LGBT+ Cypriots continue to experience discrimination in the workplace.

Lithuania was also given zero points for workplace representation, which is likely due to the restricted rights that LGBT+ Lithuanians face, such as the non-recognition of same-sex civil partnerships or same-sex marriage.

Furthermore, Lithuania received a zero-point rating for workplace representation, likely due to the limited rights that LGBT+ Lithuanians enjoy, such as the non-recognition of same-sex civil partnerships and same-sex marriages.

Q: Openness about being LGBTI at work | A: Very Open

Q: Discrimination in the past 12 months when looking for work | A: Yes

Q: Discrimination in the past 12 months at work | A: Yes

Q: Location of the last incident of hate-motivated harassment | A:  At the workplace

2. The above variables were collected for all subgroups and were used to value the following factors: ‘openness at work’, ‘inclusivity for LGBT+ job seekers’ and ‘workplace equality.’

3. Using employment statistics collected from Eurostat, the difference between each country’s working-age employment rate (2019) and the LGBT+ employment rate was calculated for the ‘workplace representation’ factor. This figure represented the discrepancy in employment between the LGBTI group and the country at large.

4. A combined score for ‘workplace equality’ was calculated by ranking the average score for workplace discrimination and workplace harassment from the LGBTI Survey (2019).

5. Each of the four factors was then ranked between 0 and 10 based on the relative position within the sample.

6. The final score out of 10 was ranked in descending order. Higher scores indicate a more positive environment for LGBTI workers.