How Emotion Can Help Drive Your Digital PR Campaigns

“Make them feel something” - that is what anyone in marketing will tell you. Whether it’s building brands or building links: you have to incite emotion.

We’ve had clients in the past worried about some of the debate sparked over their Digital PR campaigns, and to that, we always say the same thing… We’d be more worried if the campaign wasn’t making any noise!

🤳 Client: “But readers of XYZ publication seem pretty angry about the findings.”

Although a negative response to a campaign does do funny things to your heart rate, my theory before embarking on some data-led analysis was that actually, it doesn’t matter if your campaign generates positive or negative emotions. Make someone feel a certain way, and you’re more likely to land coverage. In fact, I thought that negative emotions would get your story in more outlets than positivity would - that was my initial hypothesis in any case.

I also wanted to know which specific emotions carried more weight than others when it came to landing links for a story.

I knew I would have to dig deep into our campaigns and analyse a fair few in order to glean meaningful data, so I took our last 200 examples of digital PR campaigns and decided I’d start categorising them by sentiment. The most common emotions I wanted to explore were as follows:

I also looked at sadness, but we did not have enough campaigns falling under that category to be able to use it in the study.

After carefully going back over each campaign and analysing the tone of voice, words used, and general mood of the campaign, I was able to assign one of the above sentiments to each campaign. Each emotion had roughly 20 campaigns attached to it.

We keep a log of all our PR placements, so I took a look through this to see the sort of coverage each campaign got, and then worked out a total for each sentiment, creating a ranking of highest performing emotions to lowest.

Overall, campaigns with positive emotions earned more links on average than those with negative connotations.

You’ll remember that my initial hypothesis was that negative emotions would get more coverage, so I was surprised by this result. I know that many journalists love running with a negative, shock-value headline.

Then I thought back, to the beginning of lockdown, and remembered a particular campaign we did. 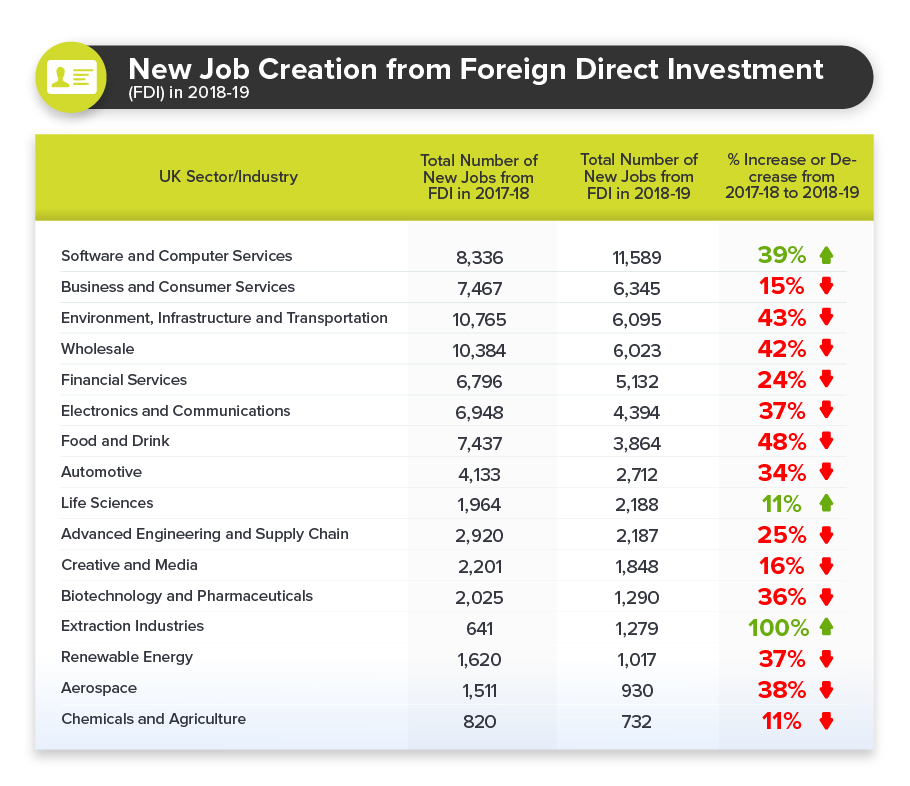 We had looked at some data detailing a decrease in foreign investment, which led to many job losses in certain sectors (but not all). The first press release went out with the subject line:

Revealed: 18,000 fewer jobs from foreign investment in the UK

We received absolutely no coverage for it.

This left us all scratching our heads slightly, as this kind of story would usually do well (in fact, we have previously covered the data to good effect).

Our Digital PR exec, Khilen Shah thought maybe it was just too negative. At the time this campaign went out, Coronavirus panic had kicked in big time, and the media was saturated with data on death rates, lockdowns, and infected areas. So, he decided to take the same data and flip it to analyse the sectors where more & more jobs were being created. Khilen then came up with different subject lines to target these sectors – with one example being:

Over 5,000 jobs created from foreign investment in financial services

And boom – it started getting placements straight away!

Everyone at the agency also started receiving emails from journalists- specifically asking for more positive stories to showcase.

So the timing of campaigns could definitely have skewed these results.

However, that doesn’t mean that anger or disgust are bad emotions for your PR campaigns - it’s all about reading the current mood of the media. As most of the campaigns analysed here went out during COVID19, it’s plausible that positive stories would do better - as journalists were craving positive press releases, especially at the start of lockdown.

Which emotion carries the most weight when it comes to link building?

We found the official ranking of the emotions journalists most like to cover is as follows:

Nostalgia came out as the number one emotion that will get you coverage. This could be because, of all the emotions, nostalgia hits you as a very personal one - and research has shown that it is great for engaging millennials in particular. 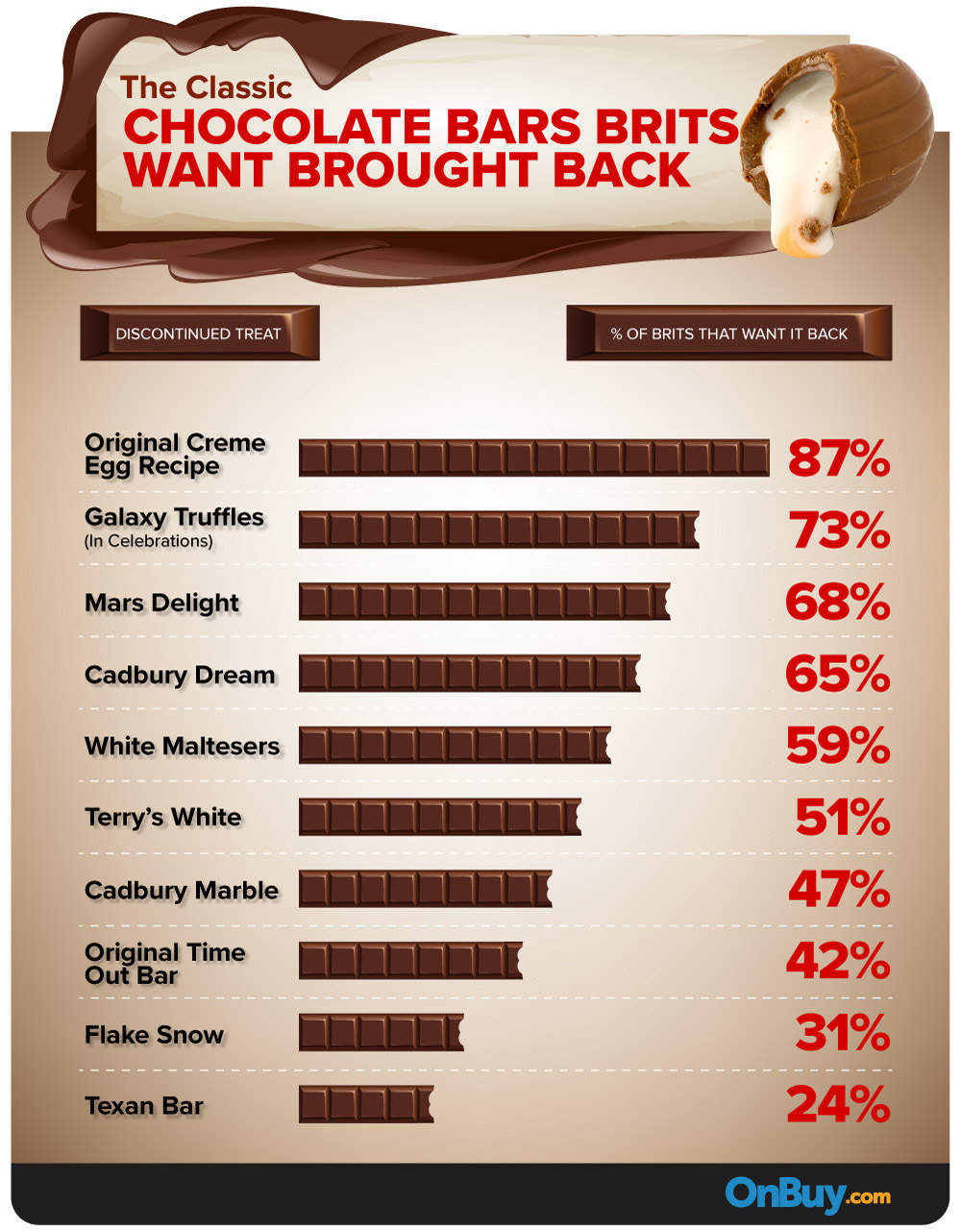 One of our campaigns in the nostalgic category that stands out, is our piece for a client that surveyed Brits to find out what nostalgic chocolate bars they’d love to bring back most.

Helped along by the fact it was World Chocolate Day, this campaign gained a whopping 214 placements (with well over half being links back to the clients site).

A campaign like this taps into very personal childhood memories, which not only cause debate, but they are great fodder for social media platforms.

On the other end of the scale, we found “shock value” PRs tended to not get as much coverage as the more positive-evoking emotions. Presumably, part of the reason for this could be their unbelievability factor, or, depending on the campaign content, the journalist might have to go through some extra fact-checking before publishing your shocking findings. 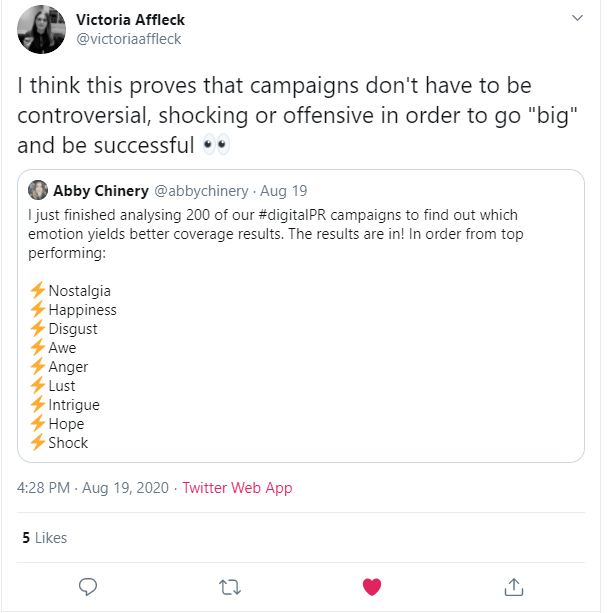 In conclusion, although it is a good idea to think about the emotional value of your campaigns at the ideation stage - it might not be worth getting hung up on trying to force certain sentiments into campaigns, especially if you have tricky clients who like to stick to stories very close to their industry.

For instance, the emotion “lust” - whilst fun to do, and with a good chance of mass coverage - it might not be appropriate for your client’s niche, or KPI.

These campaigns tend to do really well in national newspapers however, to minimise the average cost-per-link for our clients, we will also want to outreach to even the slightly lower DA sites that are likely to also be interested in the research. For these sorts of sites, emotions such as intrigue may be a better bet - slightly lower domain authority, sure, but much more targeted and relevant for your niche (we’ve spoken about the increasing importance of relevance in Digital PR before).

And why settle for one emotion? As humans, we can cover a range of sentiments in a short space of time - and so can your campaigns. Making sure you include different angles to incite different reactions is a good idea to help with creative diversification in link building - put simply, it will appeal to a larger audience which will help the rate of coverage you can expect to see.

Let us know in the comments which emotions you love covering in your campaigns - or get in touch if you’d like us to create a sentimental story for your brand.